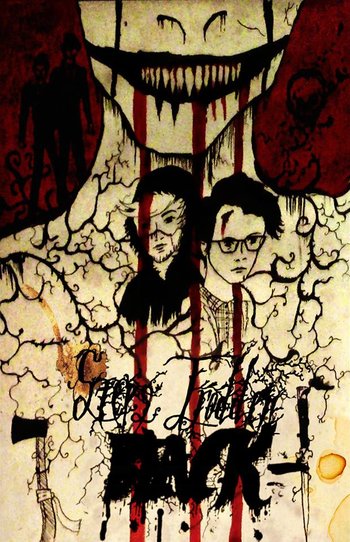 Trust, Friendship, and Killing Monsters.
Oliver: What was that?
Jack: I don't know. Could be anything. This forest is old. Very old. [beat.] Old as balls.
Advertisement:

An Indie Science Fiction film shot on a budget too small to afford shoestrings.

Introverted Oliver is going on a camping trip with an old friend, his new friends, and his old friend's new friends. As tensions rise, young love blossoms, old wounds open and hormonal teenage egos clash, a mysterious creature begins picking off the campers one by one.

The film takes the structure and premise of a Slasher Movie and combines them with the emotional depth and character development of something like The Perks of Being a Wallflower, focusing more on the relationships between the characters and their realistic reactions to the deaths of their friends than reveling in violence. Along the way, various science fiction tropes are parodied and lampshaded, all of which is injected with a heavy dose of pitch Black Comedy.

The film was shot over the course of three years on a budget of less than a thousand dollars. Despite this, it achieves impressive production values and has been praised for its realistic teenage dialogue and humor.

Can be watched in its entirety for free here.