Film / The Story of Temple Drake 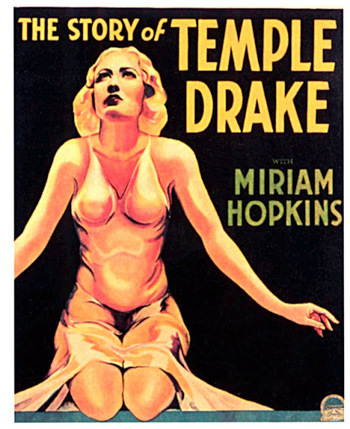 The Story of Temple Drake is a 1933 film directed by Stephen Roberts.

Temple Drake (Miriam Hopkins) is the hell-raising, fun-loving granddaughter of Judge Drake, the preeminent man in some Mississippi town. The judge would like Temple to marry Stephen Benbow, a handsome, gentlemanly attorney, but Temple won't do it, because she is too busy drinking and partying. She specializes in flirting with young men but never actually putting out, much to their annoyance.

All the drinking and debauchery leads Temple to disaster one night, when she leaves a party at Judge Drake's house with Toddy, one of her drunken admirers. Toddy promptly runs the car off the road and crashes it. They make their way to the decaying ruins of a mansion, which, to their great misfortune, is occupied by some creepy moonshine-making hillbillies and their scary bootlegger boss, a gangster called "Trigger".

All the various creeps and reprobates in the gang start circling around Temple, except for Tommy, the dumbest hillbilly, who undertakes to protect her. For his trouble he's shot and killed by Trigger, who promptly rapes Temple. Trigger whisks a shell-shocked Temple to the big city, and more traumas follow.

Based on William Faulkner's most controversial novel, Sanctuary. Featuring winking sex talk, rape, murder, Miriam Hopkins in a slip, and strongly implied prostitution, this is a typical product of The Pre-Code Era.