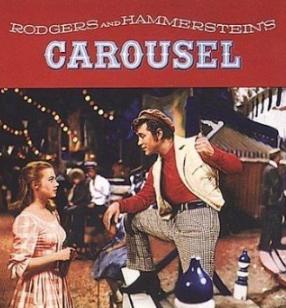 A 1945 musical adaptation of Hungarian playwright Ferenc Molnar's 1909 play Liliom, Carousel was Rodgers and Hammerstein's follow-up to their first smash, Oklahoma!. A film version was released in 1956, a year after the film version of Oklahoma! (and reuniting the latter's two leads).

Billy Bigelow is a carousel barker at a New England village, while Julie Jordan is a mill worker from the same town. They meet, kind of fall in love and get married. The two lose their jobs, which frustrates Billy to the point that he lets loose his violent tendencies on Julie. Despite this, she's still willing to love the guy; when she gets pregnant, Billy decides to participate with a chum named Jigger in robbing Julie's former boss. The plan goes awry, and a disgraced Billy takes his own life. Fifteen years later, Billy is given a chance by "The Highest Judge of All" to redeem himself by helping his family out.

A remake was planned with Hugh Jackman as Billy, but nothing came of it.

This story features examples of: