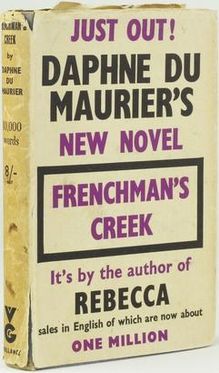 This book is for The Birds
"Despite the explicit marketing tie-in ("From the studio that brought you Shrek"), both [Sinbad: Legend of the Seven Seas and Spirit: Stallion of the Cimarron] are traditional hand-drawn cel animation with nothing to connect them to Shrek in look or in spirit."
— Steven D. Greydanus, Decent Films

When a creator is maybe not prominent enough to carry a title on their own, but their work is popular and/or widely loved enough to mean something, the promoters of their latest project will highlight their track record to sell this new thing to people. Sometimes it does give the audience some clues as to what they might expect — a signature line, a Creator Cameo, other tropes said creator is known to utilize. Exceedingly common in literature, with the cover frequently advertising something akin to "from the New York Times bestselling author of Insert Book Here." Other common promotions include "by the bestselling author of the book that was made into a successful movie" or even "by the author of the bestselling franchise, of which this book is the next installment".

Can lead to Director Displacement in films and television when the "creator" is a producer — as this name immediately becomes associated with the work, people not bothered to look any further than promotional material will only know them as the creator of it and perpetuate both the displacement and the future of works being promoted by their name as they become more spoken of.

Sometimes may be used as a way to Polish the Turd.

May take the form of:

Compare Billed Above the Title (where the Creator's name is displayed more prominently than the title of the work), He Also Did (for when the work is incredibly out of genre for the Creator, but it isn't necessarily advertised), Product Placement (where products are advertised by their inclusion in a work), In Case You Forgot Who Wrote It (where the Creator's name is part of the title or Tagline), Preview Piggybacking (where a work advertises an included preview for a much more anticipated work). Contrast Competing Product Potshot.

Authors whose other works are advertised:

Works by an editor/author, but another author is advertised:

"From the guys who brought you The Most Popular Girls in School".

"From the guys who brought you The Most Popular Girls in School".