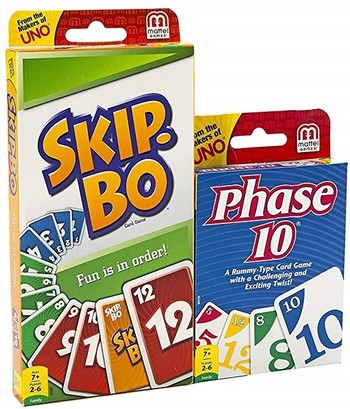 The Makers of Uno are a series of Card Games published and distributed by International Games, Inc. (IGI), the makers of the card game UNO. When Mattel purchased IGI in 1992, the company kept the moniker for their card games, although only Uno and Skip-Bo survived the Channel Hop.
Advertisement:

Below is list of games with the "Makers of Uno" inset on the box. Those in bold are currently in print. Note that the year represents its debut launch, not when the company acquired the rights to publish.

Information about the card games Uno and Dos can be found here.

The Makers of Uno provides examples of: