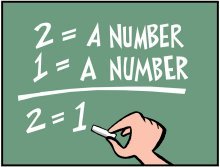 "'All wood burns,' states Sir Bedevere. 'Therefore,' he concludes, 'all that burns is wood.' This is, of course, pure bullshit. Universal affirmatives can only be partially converted: all of Alma Cogan is dead, but only some of the class of dead people are Alma Cogan."
— "A Lesson in Logic", Monty Python and the Holy Grail (Soundtrack from the Motion Picture)
Advertisement:

Compare Guilt by Association Gag, for situations where a character is assumed to be just like the other character or characters they happen to be with at the moment.

Guilt By Association assumes that two separate things share a negative property because they share a different, unrelated property, usually a relation to some undesirable person or ideology. (See also Stop Being Stereotypical, Don't Shoot the Message.)

A very common form of Guilt by Association is "Hitler did it, therefore it's bad." While persuasive, it's not always true, since while Hitler did a lot of evil things, he also was a massive advocate of animal rights (well, definitely more so than Jewish, gay, or Roma rights...), built motorways, painted pictures, hosted the Olympics, ate sugar, and breathed oxygen. This is related to the Fallacy of Division, since it assumes the evilness of the whole of Hitler also applies to any part of Hitler. Related to Godwin's Law and Hitler Ate Sugar.

The flip side of Guilt by Association, stating that two things share a positive quality because they share a different, unrelated quality.