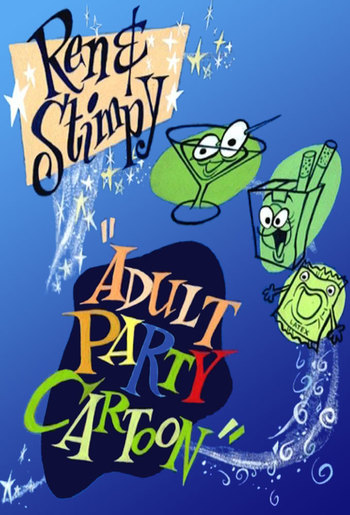 That title is there for a reason.
Advertisement:

In the early 2000s, a cable network known as TNN (now Paramount Network) was rebranding itself into Spike TV, and as part of that rebranding wished to break into the late-night adult animation game that Adult Swim had just proved lucrative. While they already had some shows in production, they wanted another cartoon that could serve as a flagship series for their animation block.

Thankfully, fellow Viacom-owned cable channel Nickelodeon had a certain cartoon in its vault starring a sadistic chihuahua and a dopey cat that just so happened to be a hit with college students during its initial run. Sure, its creator was booted off the original production because he couldn't ship an episode on time if his life depended on it, and even ignoring that, was widely rumored to be an incredibly difficult person to work with.

But hey, that was a decade ago.

The call was made: John Kricfalusi would be given carte blanche to make an "extreme" version of his classic show, and in 2003, it debuted on television.

Ren and Stimpy: Adult Party Cartoon, which would end up becoming John K.'s last television series, is a more "mature" take on the eponymous Grossout Show duo, Ren Höek and Stimpy J. Cat. This includes a glimpse at a very dark childhood filled with animal abuse, leering at girls in bikinis on the beach, some very disgusting male pregnancy, a lot of gay jokes, and detailed information about how cruel and miserable life is — oh wait, that was one of the episodes that was never completed.

Adult Party Cartoon suffered from a poor production schedule birthed from Kricfalusi's infamous perfectionism, which didn't help the fact that the final product ended up being panned by both critics and fans alike for being a show arguably too raunchy for even its new target audience of males 18-35 to enjoy, having greatly exaggerated some of the original's elements while completely lacking others, such as its fake commercials. Perhaps the writing was on the wall in this regard, as both previous showrunner Bob Camp and voice actor Billy West refused to get within a million miles of the production, among several other old crew members. West's Stimpy would go on to be replaced by Eric Bauza, while Kricfalusi would reclaim his roles as Ren and Mr. Horse. Cheryl Chase and Harris Peet also returned to do voice work.

While the show was the most successful of Spike TV's animated programming and the animation block as a whole (called "The Strip") actually started off surprisingly well in the ratings against Adult Swim, the network losing interest in animation meant the whole experiment died within a year. For what it's worth, every show managed to get all their episodes out before then.... except Adult Party Cartoon. Of the six episodes that were ordered, only three episodes made it to air. The other three were completed after the fact, but remained unseen until Paramount released the show in its entirety on DVD in 2006, appropriately titled "The Lost Episodes".

And then there was that aforementioned seventh Unfinished Episode that started production under the hope that another season was in the cards, which never finished production due to a lack of money. This actually led to a lawsuit with animation house Carbunkle Cartoons that made Spümcø close for bankruptcy, and had Kricfalusi slowly paying off the studio and the artists that were under his employ for several years afterward. note Note that when an animated series has completed work on its first season, it isn't uncommon for the studio/network to let them start pre-production work on a second season ahead of an official greenlight, just in case the show is a success. So this wasn't (solely) the result of John K.'s hubris, so much as him just continuing to be really, really bad at managing a production in a timely and cost-effective fashion.

In light of the show's infamous legacy, John Kricfalusi would later claim Executive Meddling — though he touted his creative freedom while the show was airing, he would come to drop some hints that Spike TV wanted the show to be more like South Park, hence the high levels of Vulgar Humor, which the Comedy Central series was known for at the time. But considering the similar obfuscation of truth that occurred with his removal from the original Ren and Stimpy, let's just say the truth lies somewhere in the middle.

While everyone at Viacom would disown APC and avoided the idea of ever producing new Ren and Stimpy content for years, they still acknowledged the existence of the original show and even showed reruns on NickRewind. That being said, when John Kricfalusi's history as a sexual predator was exposed in 2018 by two of his victims, Robyn Bird and Katie Rice, Nick pulled the original series from reruns and covered up any and all references towards it or its creator on their websites and social media for several months afterward. When the announcement came of another adult-targeted revival in 2020

, this time for Comedy Central, John K. was specifically stated as not having any involvement.

Also, don't eat while watching this show. Eating while and/or after watching can give you some good Squick.

And all because the chief loves us

And all because the chief loves us