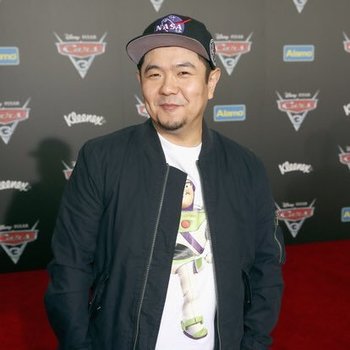 Eric Adrian Bauza (born December 7, 1979 in Toronto, Ontario) is a Filipino-Canadian-American animator-turned-voice actor and stand-up comedian who, despite being a bit newer to the biz next to his contemporaries, has made quite the presence as of late.

He got his start as a character designer and layout artist at various studios, including working on both the The Brave Little Toaster sequels and The Ripping Friends, which acquainted him with the animation world, and he would soon get his first big role on the short lived Ren & Stimpy "Adult Party Cartoon" as the new voice of the titular Stimpy, after the original voice actor (Billy West) vowed never to work with John Kricfalusi ever again due to his Small Name, Big Ego attitude.

Over the past decade since, he has built up a considerable resume that includes roles in The Fairly OddParents, El Tigre: The Adventures of Manny Rivera, Ben 10: Omniverse, Uncle Grandpa, and Breadwinners. His versatility has also led him to be picked as the new voice of Marvin the Martian (formerly voiced by Mel Blanc) in The Looney Tunes Show and Fenton Crackshell/Gizmoduck (formerly voiced by Hamilton Camp) in DuckTales Remastered. He is one of the current voices of Bugs Bunny, Daffy Duck, and Tweety Bird as well.

He can also be found on more adult-oriented fare, including several Channel 101 shorts.