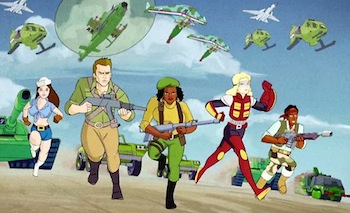 Wingman is having the time of his life, being a G.I. Joe. But when he kills Destro, he is court-martialed as Joes are not allowed to do that. Then he and his gang meet Fourth Wall, and when Fourth Wall mentions the name Greendale he keeps having strange flashes to a place that is surprisingly more three dimensional then he is...