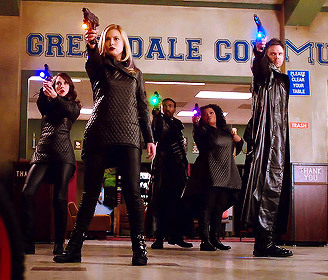 Let's burn this mother down.
"Listen up, people! We got an inter-dimensional battle on our hands. The evil counterparts are waging a war. And it's either us... or us."
— Abed
Advertisement:

With Jeff having passed history and collected all his required credits, Annie and the Dean plan his graduation, but Jeff is hesitant to leave his friends behind to rejoin his old partner. As the study group plans a party, Jeff rolls a die to decide who has to get soda... which lands on its side, in the crack between the tables. Abed stares in horror, but decides to shake off his sudden premonition. But Evil!Jeff had already teleported into the Dean's office, only to discover that his good self is lamer than ever, and reluctant to leave Greendale. Together with Evil!Annie, they decide to destroy the study group from within, forcing Jeff to graduate.

The Community episode "Advanced Introduction to Finality" provides examples of: