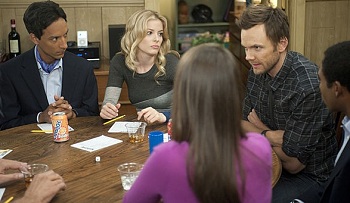 Just so you know, Jeff, you are now creating 6 different timelines.note Of course I am, Abed.
Advertisement:

The study group gets together for a housewarming party for Troy and Abed's new apartment. In particular, they bring attention to a piece of decoration they are very proud of: an Indiana Jones boulder escape scene diorama in the living room. After everyone has shown up, the group starts playing Yahtzee until the pizza arrives and nobody wants to go down to get it. Jeff suggests rolling a six-sided die to decide who gets to go downstairs, and Abed mentions that in doing so he's creating six different timelines (though it's actually seven if you count the "prime" timeline). They even come conveniently numbered by the order of the die roll they're associated with.

Just as Abed predicted, the die roll causes the episode to split into seven different stories depending on who went down to get the pizza.

Example of:
Confirm Before Reveal