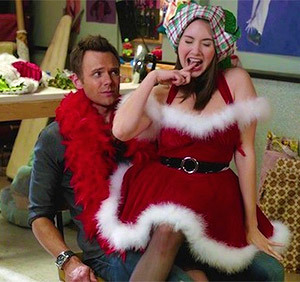 As the study group tells each other their plans for Christmas (none of which involve each other), they (and the rest of the cafeteria) are interrupted by the new Glee Club (the old one having died in a bus crash) singing their usual mashups. However, this time the Glee Club is interrupted by Chang, who serves them with a cease-and-desist order for singing copyrighted songs on behalf of ASCAP (who found out after receiving an anonymous notification from Jeff), causing them to immediately panic and suffer a collective nervous breakdown.

Dean Pelton and Glee Club Director Mr. Radison (who prefers just being called "Mr. Rad") try to get the study group to fill in for Glee Club at the Christmas Pageant, but the group (led by Jeff) declines. Concerned that the group is growing apart, Abed later goes to see Mr. Rad, who convinces him that joining Glee and doing the Pageant will stave off the growing darkness and make everything brighter ("Glee"). Enthusiasm for Glee Club spreads like a virus, going first from Abed to Troy. Abed convinces him in rap that he can celebrate Christmas even though he's a Jehovah's Witness ("Jehovah's Secret Witness") and then Troy and Abed get Pierce to join through his Baby Boomer vanity ("Baby Boomer Santa"). Pierce then gets Shirley via a group of cute children singing about not knowing the meaning of Christmas ("Happy Birthday, Jesus!"). Annie gets Jeff by singing a seductive song about not understanding Christmas ("Teach Me How to Understand Christmas"). Finally, only Britta is left until she finds Jeff and he starts singing at her. Within a day, the entire study group decides to do the Christmas pageant.

Backstage on the day of the Pageant, Mr. Rad tells Abed (playing the King) that the group won't be filling in for Glee Club for just Christmas: Glee Club is forever. To stop Glee from taking over their lives, Abed switches roles with Britta, who promptly ruins the show (because she's the worst) and causes Mr. Rad to have his own nervous breakdown and accidentally confess that he caused the initial Glee Club's bus crash. Abed concludes that forcing things to be bright just made the darkness underneath even darker.

Back at his apartment, Abed watches the Inspector Spacetime Christmas Special alone, until he hears the rest of the study group singing Christmas carols outside his door. He lets them in and they all sit down to watch it together.