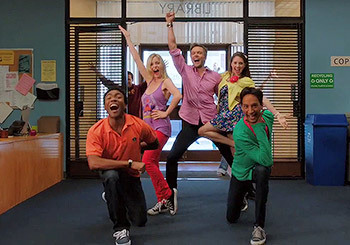 This year will be more normal than the previous two, as explained by the opening musical number.
We're gonna have more fun
And be less weird
Than the first two years combined!
Advertisement:

Pierce tries to rejoin the group, only to be edged out by Jeff when he claims that their friendship has evolved beyond needing to be in the same class. In reality, though, he only wants Pierce gone, and when he gets kicked out of the biology class it sends him panicking.

Chang's been trying to live in the air ducts, though Troy has convinced Dean Pelton that it's just Annie's Boobs the monkey, causing him to get the ducts gassed.

The Dean, meanwhile, wants no more of the National Lampoonery that's been going on the past two years and tries to take a more active administrative role, starting by chastising the Dean of Greendale's Air Conditioning Repair Annex for purchasing a new coffee machine. However, his efforts to crack down reveal that not only does the Annex have a higher rate of graduate employment, 80% of Greendale's funds come from it. The Vice-Dean subsequently gets the Annex split off, leaving Greendale virtually bankrupt. The security guards quit and Chang becomes their replacement, working for room and board.

In a third, smaller subplot, Britta tries to help Abed cope with Cougar Town's premiere getting bumped to January by hooking him on British shows. Her successful efforts lead her to decide to major in psychology and become a therapist.

Abed freaks out when his new favorite show ends with a mass suicide after six episodes.

Example of:
"Everybody Dies" Ending

Abed freaks out when his new favorite show ends with a mass suicide after six episodes.