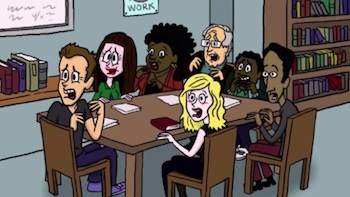 The group discovers that Troy's old monkey Annie's Boobs has been stealing things from them ever since his disappearance. His stash at first prompts fond memories for everyone, but this soon turns to the realization of just how dysfunctional they all are, and prompts everyone to examine whether they should all just go their separate ways.

The Community episode "Paradigms of Human Memory" provides examples of: