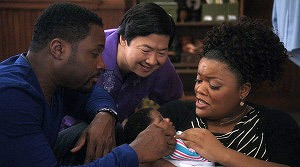 Professor Duncan is celebrating exam day by drinking with the class and giving everybody "A"s, Dean Pelton stops by with a reporter for an unscheduled class observation. These plans are also upset when Shirley goes into labor. No ambulances are available due to a "race kerfuffle" happening in the parking lot. Abed guides Shirley through delivery, working from his earlier experience in childbirth. Shirley, however, is uncomfortable with him looking at her "nethers", so Britta must step up.