All Issues Are Political Issues 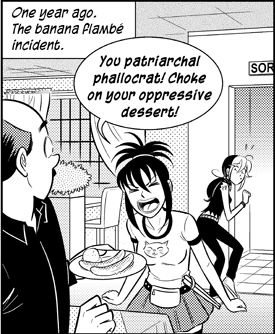 Banana flambé with a side order of Straw Feminist.
"In a democracy, everything is political. And everyone."
— Chancellor Palpatine, the novelization of Revenge of the Sith
Advertisement:

This trope occurs when a character starts a political discussion on an issue which the other characters don't feel to be political at all. ('Political' here is used as an umbrella term for 'political, philosophical, economic, cultural...' - in short, everything people can get into a more or less intellectual argument about).

For example, Alice and Bob are on vacation in France, and go to visit the Palace of Versailles. Bob marvels at the regal splendour of the centuries-old palace, when suddenly, Alice exclaims: 'Just think of all the misery and oppression the French people were put through so a small elite could live in such luxury! No wonder they revolted.' Bob (and every other visitor in earshot who happens to speak Alice's language) stares at her dumbfounded, then mutters something along the lines of 'I hadn't looked at it from that angle before.'

A few weeks later, back home, Alice and Bob are out shopping when they come across a seemingly innocent billboard for a certain line of women's clothing. Alice makes a remark about how the ad is degrading to women, leading Bob to ask, 'What do you mean, degrading to women?' Alice then goes off on a long rant about the ad's supposed misogynistic underpinnings.

In both cases, Alice has employed this trope: she has called attention to the political side of something of which Bob, and most other people in their Verse, were hardly aware that it had.

There is a sliding scale as to how sympathetically this is portrayed. On the negative extreme, Alice is an annoying pedant, making Serious Business out of a trivial matter; on the positive extreme, she's the Only Sane Woman of the setting, and everyone around her is shallow and/or uncaring.

Of course, this can be Played for Laughs if the issue in question is silly enough.

Not to be confused with What Do You Mean, It's Not Political?, which is about the audience seeing a political message in a work which wasn't intended to convey one. Supertrope of Everything Is Racist and Straw Feminist. Related to Windmill Political. See also Single-Issue Wonk, in which this applies for one issue for the person.

But the painting "The Charcoal Dish," of which Mangakāhia is a fan and Bond the sole detractor, may genuinely be a subversive critique of the sinister One World Order, of Wires, depicting innocent people happily served up from a giant dish-shaped building onto a laden picnic blanket, to be eaten by hidden monsters.