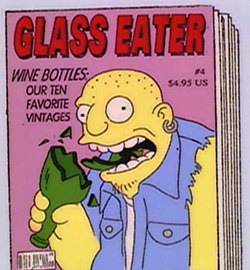 "Private investigator Emerson Cod was enjoying the latest issue of Knit Wit Magazine, his literary outlet for knitting humor, when he received a phone call from the mother of one Anita Gray."
— The Narrator, Pushing Daisies
Advertisement:

There's a magazine for everything.

A character subscribes to a weirdly specific fandom magazine or trade publication you would never expect to have an audience, or that speaks volumes about their character. This either represents their interest in a very niche hobby, or shows that a perfectly ordinary part of life is Serious Business to them. If it's a trade publication, they probably belong to a Weird Trade Union. As magazines are starting to fall out of fashion (particularly the niche magazines this trope parodies), this trope is becoming increasingly less common, but still maintains some ground.

Named after The Wiki Rule, its online equivalent. Related to Collector of the Strange and Pastimes Prove Personality. If a Manly Man subscribes to Cross-stitch Quarterly, it's Real Men Wear Pink, and if a Nightmare Fetishist has managed to find a publication devoted to Cross-stitch Bondage Babes, it's Rule Thirty Six.