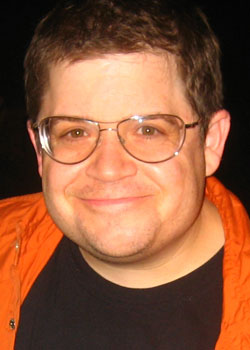 Pictured: A drunken halfling
"Bring forth my doom-spawn from your stink-crevice AND PROVE THE GYPSY WRONG!"
— Patton Oswalt's way of declaring to his wife his delight at her pregnancy.

Peter Patton Oswalt (born January 27, 1969 in Portsmouth, Virginia) is an American stand-up comic and actor, known for his "nerd-philosopher" comedic style, and working with fellow alternative comedians such as Brian Posehn, David Cross, Zach Galifiniakis, Maria Bamford, and Blaine Capatch. He has a daughter named Alice, and was married to crime writer Michelle McNamara, until she suddenly passed away in April, 2016. In 2017 he married actress Meredith Salenger.

This comedian's material contains examples of the following tropes: