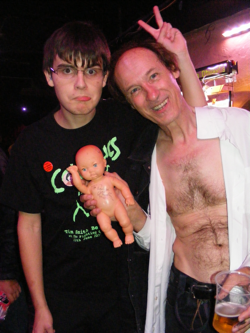 Our Hero and left; an Otwat. Inset; THE BABY
What is this twat on the stage? He's John Otway (born 2 October 1952), everyone's self loathing punk rocker singer-songwriter. Armed with only a modicum of musical talent, this man likes to jump from great heights, headbutt microphones, perform front rolls, all for his fans to cheer at him.
Advertisement: