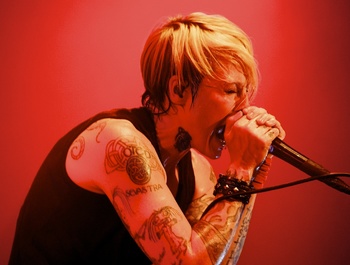 Screaming & growling: Otep Shamaya's default setting.
Otep (stylized Ot3p on their third album cover, Ot6p on their sixth, and O7ep on their seventh; often stylized OTEP) are a Los Angeles based Nu Metal / Alternative Metal band that was formed in 2000. They are known for their angsty lyrics, downtuned riffs, fierce political commentary, and their lead singer (who is also named Otep) being a woman who screams but also raps and occasionally sings cleanly. She alone is the sole original member.
Advertisement:

Otep were discovered by Sharon Osbourne (yes, THAT Sharon Osbourne!) who saw one of their shows and asked them to play Ozzfest before they were even signed. A record deal soon followed as they were signed to Capitol Records in 2001, where they would stay until being signed to Victory in 2009.

Otep Shamaya is an out lesbian and political activist who champions causes such as gay rights, equal treatment for women, animal rights and environmentalism. She also runs the Web sites allshapesallsizes.org, girlsoutnow.org and imnotamonster.org, as well as having her own account on pretty much every social network on the Web. She has also appeared on HBO's Def Poetry.

Not to be confused with Opeth (as they often are).