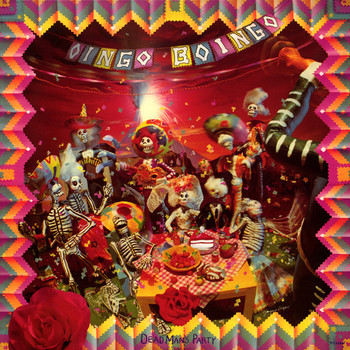 "Don't run away! It's only me!"
Dead Man's Party is the 4th album by Cult New Wave band Oingo Boingo, released in the year 1985.
Advertisement:

This album, unlike the earlier albums of the band, has a more poppy and danceable sound and basically downplays the whole Ska influence those three albums had. And even though it drop the Ska-Punk elements to a degree, the album also has the bands three Signature Songs on it: The Title Track, "Stay" and the theme song for Weird Science (the latter of which Danny Elfman regretted since it didn't fit the repertoire).

It's a troper's party! Who could ask for more?: