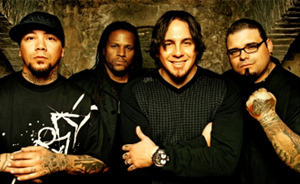 P.O.D. is a Nu Metal/Alternative Rock band formed in 1992 in California. The band is an example of both Nu Metal and Christian Rock, and is also known for incorporating significant Reggae influences, which decidedly causes the band's sound to stand out among their nu/alternative metal peers. In later years, however, the band shifted from its original Rap Rock/Nu Metal sound toward a more Alternative Rock sound, with more singing as opposed to rapping, and lighter instrumentation.
Advertisement: