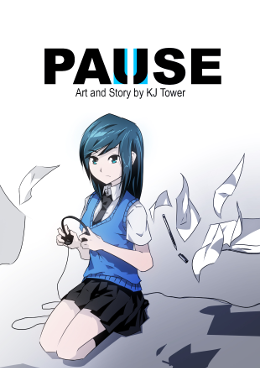 Not your typical nice girl...

is a webcomic by KJ-Tower, hosted on Tapastic, which tells the story of a boy, Yoshiro Koizumi who can apparently freeze time at will, and a girl who is immune to his time control. When the girl finds out about his power, his normal high school life is thrown into turmoil. While it seems like the perfect premise for an epic sci-fi action story it is in fact a high school love story with elements of the coming of age story. Despite the premise, the plot focuses very little on the idea of time control and more on how human relationships are affected by time control. It could be taken as a deconstruction of the whole Time Master genre.

Written in KJ-Tower's distinct style, The story has lot's of comedic and serious moments and plenty of very memorable characters.

PAUSE provides us examples of: