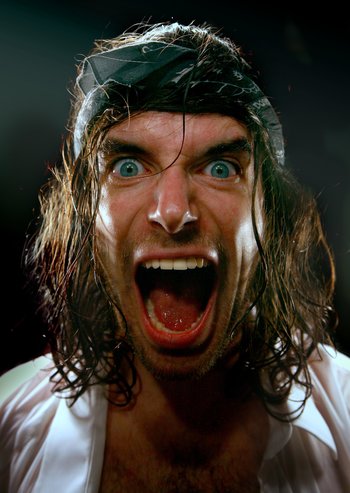 Gregg Michael Gillis (born October 26, 1981), better known under the stage name Girl Talk, is a Pittsburgh-based musician responsible for some of the most popular work with mashups and digital sampling of the late 2000s and early 2010s.

The style Girl Talk is now synonymous with consists of taking an enormous amount of samples and sequencing them into one continuous dance mix, usually through the program AudioMulch. Gillis has described this as an extensive process with ample trial and error, but the end result produces mashups that are known for being equal parts hilariously audacious and surprisingly fitting, and consisting of multiple vastly different genres at the same time (ex: the vocals of "Juicy" over "Tiny Dancer", or the vocals of "Move Bitch" over "War Pigs").

To boot, the name has also grown fairly attached to the unique brand of live shows Gillis is known for, with staples including a large group of fans routinely being pulled from the crowd to dance behind him onstage, showers of confetti and/or toilet paper, and his insane levels of animation tying everything together with levels of energy that make a guy behind a laptop seriously rival an arena concert.

Girl Talk began as a side gig in the early 2000s while Gillis studied biomedical engineering in college, and the project's sound initially highlighted glitch and noise with more erratically-paced mashups. As playing for live audiences made a demand for party-oriented music apparent, Gillis' sound evolved to both reflect that and garner much more success, with his first post-glitch work Night Ripper (released in 2006) being his first album to receive widespread attention from both the public and big-name artists.

Quitting his engineering job the next year to do music full-time, Gillis found continued success with his next works, but following both the release of 2010's All Day and his long-time record label Illegal Art going on an indefinite hiatus, he started using the Girl Talk name to do original hip-hop production work for various rappers. However, Gillis still tours to this day under the name with his signature mashup dance mixes, incorporating samples from newer music.

For over a decade, plans for another Girl Talk album never grew beyond murmurs and tidbits of info from interviews, but Gillis addressed the matter for the first time at length when several fans asked about it in a 2022 Reddit AMA

. He said that while he is always working on new mashup material for his shows, he is currently unsure about issuing another official release.