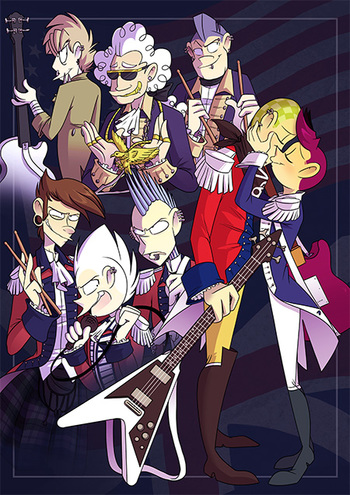 Characters in The Paul Reveres
Advertisement:

is a weird historical war comic set during the American Revolution, where all the historic battles are fought in a Battle of the Bands format, with the American militia represented by one band, The Paul Reveres, while the British are represented by The Union Jack-offs. Occasionally features other re-imaginings, such The Green Mountain Boys as a Boy Band, with Ethan Allen as their manager. Yes, really

The series follows a pink-haired Paul Revere (yes, THAT Paul Revere), frontman and whiny emo teen, as he confronts the horrors of war, and emotions he doesn't fully understand yet.

Written and illustrated by Tina Pratt. Updates every Monday.

You can read it here on the official website