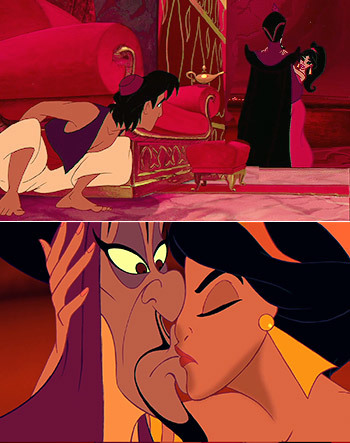 Not pictured: The disgusted reactions of Aladdin, Abu, and Iago.
Advertisement:

Someone (usually, but not always, a woman) needs something from someone else (usually, but not always, a man). So Alice lays on the liplock, and when Bob recovers from post-kiss bliss, he finds out that his wallet, or key, or secret plans, or map, or weapon, has been stolen. Or his enemies have all escaped, or sneaked into the castle, or he's been chained to his chair.

Of course in all this kissing, the kisser may get more than they were bargaining for and might get a little too into the kiss themself.

Can be used to ignite or ramp up UST between two characters, or to indulge in some Dating Catwoman. Differs from the Fake-Out Make-Out because in that case both people are faking the kissing in order to cover up that they're united in trying to do something nefarious. Distinct from Distracted by the Sexy because in this case the sexy is not just wandering by but (quite literally) in your face.

A favorite tactic of the Lovable Rogue, Classy Cat-Burglar, Gentleman Thief, Femme Fatale and particularly Affectionate Pickpocket. The target might have known something was amiss if he'd remembered The Schlub Pub Seduction Deduction.

The Batman exception: This ploy is not likely to work on a kissee who is Crazy-Prepared or even just Properly Paranoid.

In especially unfortunate cases may also be a Kiss of Death. Compare "Shut Up" Kiss and "Take That!" Kiss. Contrast Fake-Out Make-Out, which is intended to distract and/or hide one's face from other people. Also contrast Platonic Kissing, where neither party is romantically interested.

Gavin and Tim need a distraction whilst a teenaged hacker messes with the computer systems in the centre, so Julie kisses and professes her love for Brittas to distract him.

Example of:
We Need a Distraction

Gavin and Tim need a distraction whilst a teenaged hacker messes with the computer systems in the centre, so Julie kisses and professes her love for Brittas to distract him.