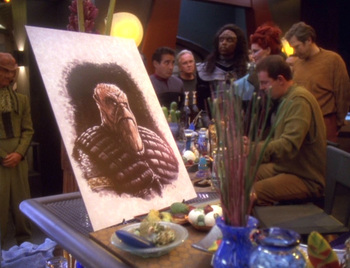 Quark's: a place where everybody knows your name.
The Federation is forced to deal with the greatest setback yet in the Dominion War: the death of silent barfly Morn! Even more shocking is Morn's will, which leaves all of his belongings to Quark. The shifty bartender is less than thrilled to inherit some bad art and rotting beets, but he is understandably more excited about Morn's hidden fortune of gold-pressed latinum. As more and more shady characters come out of the woodwork to claim their share of the latinum, the legend of Morn grows to insane proportions.