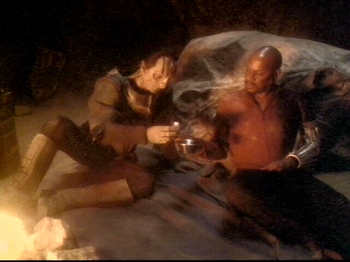 The camping trip from Hell
Sisko is on the Honshu, escorting Gul Dukat to his war crimes trial. When the captain finally visits his captive, Dukat seems to have broken out of his stupor, and they commiserate over the death of Ziyal. Just as Sisko leaves, the ship is attacked and goes down. Sisko wakes up on a desolate planet accompanied by Dukat, who carried him to a shuttle and crash landed them. Dukat has put Sisko's broken arm in a cast, set up a camp, and activated a general distress beacon. The pair agree that whoever rescues them will find one comrade and one prisoner.
Advertisement:

Dukat makes conversation with Sisko and asks why he never got credit from the station residents for being so generous during his rule, but Sisko tactfully avoids commenting. When Dukat leaves to forage for supplies, it becomes clear that he's having hallucinations of Weyoun, Damar and Kira. He angrily argues with them as they question and challenge his recent actions. While he's gone, Sisko discovers that the distress beacon is not actually sending out a signal even though it's been made to look operational. When Dukat returns, Sisko asks him to inspect it, and he claims that it's functioning normally.

While this is going on, Kira announces to the station that the Honshu has gone down and sends Worf to search for survivors, but she warns him that the Defiant is needed for an escort mission in 52 hours, so he must end his search not one second later. As the deadline approaches, Bashir and O'Brien insist on ignoring their time limit, but Worf is honor-bound to follow his orders. He relieves Bashir from duty and prepares to leave at the appropriate time.

Back on the planet, Dukat continues pressing Sisko to reexamine his assessment of him, but Sisko won't back down. When Dukat discovers that Sisko has repaired the distress beacon behind his back, he destroys it and knocks Sisko out with a metal beam. When Sisko wakes up, Dukat puts himself on trial and begins describing the history of his rule over Bajor: how he inherited a brutal regime and made many reforms to save lives, but continuing resistance from the Bajorans required harsh responses. During his diatribe, Weyoun, Damar and Kira appear and begin affirming his assertions. He concludes by spitefully laying on the blame on the Bajorans and lamenting that he didn't kill them all. Sisko uses the Gul's distraction to knock him out with the same beam and escape.

Sisko flees through a blistering sandstorm to the escape shuttle and finds that it's operational, but Dukat catches up and forces Sisko back out with a phaser. He proclaims that Bajor is dead before lifting off, his hallucinations accompanying him. But he also sends Sisko's location to the Defiant just before it can leave for its escort duty. Sisko is rescued. When discussing his ordeal with Dax, he notes that while life is usually shades of gray, there is still pure evil in the world, and that's what Dukat is. He vows that the next time they meet, "It's him or me."