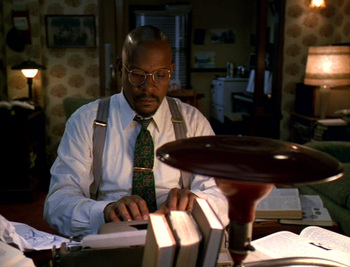 Now this one's a little different.
Joseph Sisko pays a surprise visit to Deep Space Nine to see his son Benjamin and Jake. Ben confides in his father that the war with the Dominion is taking its toll on him and he is considering stepping down. While talking with him, Benjamin sees a strange figure; a man dressed in a suit, fedora, and glasses walking past the door to Ops. No one else seems to have noticed him, though. He experiences another strange visage when talking with Kasidy afterwards; a baseball player walking into one of the homes in the habitat ring. When he tries to follow, he finds himself in 1950s Harlem and gets blindsided by a taxi. Dr. Bashir notices while treating him that Benjamin's brain is showing anomalies similar to when he was experiencing visions from the Prophets some months before. When Bashir passes Benjamin his readings, however, Ben finds himself in Harlem once more, the "readings" now a science fiction comic book in his hands.
Advertisement:

Benjamin Sisko is now Benny Russell, an African-American writer for Incredible Tales Magazine, discussing comics with a newspaper vendor (Nog) before heading to work with his co-worker, Albert Macklin (O'Brien). Joining Benny in the office is Kay and Julius Eaton (Kira and Bashir), Herbert Rossoff (Quark), publisher Douglas Pabst (Odo), and artist Roy Ritterhouse (Martok). One sketch by Ritterhouse resonates with Benny: a space station. When a memo goes around the office that pictures of the writers are being requested, both Benny and Kay are asked to "sleep in late" by Pabst. As far as the readers know, Kay (who writes under a pseudonym) is a man and Benny is white, and Pabst would prefer to keep it that way, to Benny's chagrin. The ugly truths of the era's prejudices continue to rear their ugly heads when, while walking home from work, Benny finds himself confronted by two racist police officers (Dukat and Weyoun).

On his way home, Benny is singled out by a preacher (Joseph) who espouses the glory of the Prophets, and beseeches Benny to write the truth in his heart. Moved by the preacher's words and inspired by the drawing of the space station, Benny immediately sets to work in his modest apartment writing a story. As he comes up with the name of his protagonist, "Benjamin Sisko", he opens the blinds to look out the window — but rather than seeing his own reflection, for a brief moment, he sees his protagonist, Sisko.

Benny finishes his story and shows it off to his friends at a diner the following morning: Cassie (Kasidy), a waitress and his girlfriend; Willie Hawkins (Worf), a rising baseball star combating prejudice in the major leagues; and Jimmy (Jake), a disillusioned petty criminal. Jimmy isn't so sure that the story would make print. The suspicion is confirmed when, even though most of Benny's coworkers commend his story, Pabst takes umbrage with the protagonist of Deep Space Nine and refuses to print it on the basis that the lead character is black.

Benny is disheartened. Walking home that evening, he is approached by the preacher once more, asking Benny to walk with the Prophets and to write the words that would lead them to righteousness. Undeterred, Benny sets to work writing a new story, typing into the night another story of the adventures of Benjamin Sisko. Throughout the next couple of days, Benny keeps having strange visions, seeing the people in his life as characters from his story; Kay as the feisty Kira, Willie as the proud warrior Worf, and Cassie as Sisko's love interest Kasidy. These strange visions distress him greatly, leading Benny to think he's losing his grip on reality and becoming Sisko.

The following day, Pabst explodes on Benny for continuing to write Sisko stories. Albert suggests ending his story as though it was all a dream, which may be the only chance that Benny has to have the story published at all, so he leaps at the opportunity. Benny is beside himself with joy at finally having found success in his writing, and goes out partying with Cassie to celebrate. He is approached once more by the preacher, who cautions Benny that this is only the beginning, and the path of the Prophets would lead into darkness and despair.

Shortly afterwards, gunfire rings out. Benny goes to investigate, and sees Jimmy dead on the streets, shot while trying to break into a car by the police officers that harassed him some nights before. The two officers brutalize Benny and beat him within an inch of his life for hitting one out of anger, with Benny seeing them as the villains of his story.

After taking a few days to recover, Benny heads back to the office to see his story finally hitting the shelves. Unfortunately, when Pabst returns from the presses, Benny learns that the entire magazine had been pulped by the bosses. Benny believes the magazine was pulped because of his story. To make matters worse, the head publishers, who pulped the magazine based on Benny's story, have also fired Benny. Benny finally loses his grip, calling out everyone in the room and passionately defending not only his humanity, but Sisko and everything pertaining to Deep Space Nine: "You can pulp a story, but you can't destroy an idea!"

Benny suffers a nervous breakdown and is taken away in an ambulance. While being taken to a hospital, he is approached one last time by the preacher, who commends Benny for walking in the path of the Prophets. When Benny looks out the windows of the ambulance, he sees a field of stars zooming by him as the Prophets' preacher calls him "the Dreamer, and the Dream" ...

Benjamin Sisko awakens, having only been unconscious for a brief time. The neural abnormalities have subsided. Benjamin and Joseph enjoy one last chat before Joseph returns to Earth, with Ben, inspired by the dream he had, vowing to stay on the station and see things through to the very end. What if, however, that his dream wasn't a dream? What if Deep Space Nine, and everything Sisko knows, are nothing more than figments of the imagination of a writer from far beyond the stars?