Can't Kill You, Still Need You 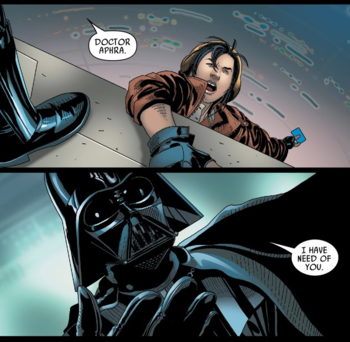 "The only rules that really matter are these: what a man can do and what a man can't do. [...] And me, for example, I can let you drown, but I can't bring this ship into Tortuga all by me onesies, savvy? So, can you sail under the command of a pirate, or can you not?"
— Jack Sparrow, Pirates of the Caribbean: The Curse of the Black Pearl

When one person spares the other's life (despite really wishing to kill him on the spot) because he intends to use him later.

One response to Get It Over With. If a lesser villain is smart, they may make sure their boss always needs them, lest they outlive their usefulness. Can also prompt Stop, or I Shoot Myself! to put the boss at a disadvantage. Clever characters (almost invariably villains in this case) will typically resort to I Will Punish Your Friend for Your Failure to get around this. This trope is a good way to avoid Mook Depletion.

Can apply to both good and bad guys; if the latter, it's a subtrope of Pragmatic Villainy. Compare to Enemy Mine, Reforged into a Minion, I Need You Stronger, and I Want Them Alive. Contrast You Have Outlived Your Usefulness, You Have Failed Me, and We Have Reserves. Compare/contrast Sympathy for the Devil and Sympathy for the Hero. When someone tries to invoke this it's Plea of Personal Necessity. See also Vetinari Job Security.