Webcomic / Be the Sea Dweller Lowblood 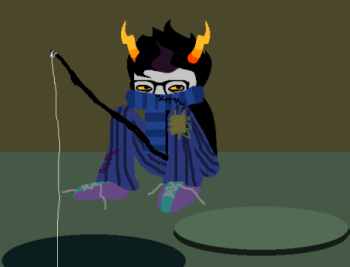 Your name is Eridan Ampora, and there are times when you really hate being a SEA DWELLER.
Advertisement:

Sadly, it has been on an indefinite hiatus since May 2012, and has likely been discontinued.

In which a sea dwelling lowblood troll who would be considered a highblood in an Alternate Universe where the Sufferer's revolution had not succeeded but instead reversed the Hemospectrum engages in shenanigans in order to fill his non-pale quadrants; has various redrom tension with a ship-happy highblood Archeradicator who shares his love of Troll Disney sing-a-longs but may want to replace the sea-dweller's witch of a moirail; and engages in lopsided blackrom tension with the Imperious Grand Advisier, who may or may not develop black feelings to match the main character's.

Also features: a gold blood hacker who attempts suicide and haunts the royal hive of Her Imperious Condecension, bringing back into the open red feelings between the two of them; a lowblood junkyard worker with sweat issues explores but mostly denies his caliginous feelings for a sopor-addicted subjugglator who is the friend of a First Guardian and a robo-legged gold blood; a turgid backstory is hinted at which involves several previously mentioned characters in addition to another lowblood with sinister motives; the aforementioned nefarious lowblood is revealed to be in cahoots with a coalition of sea dwellers hoping to create a class uprising; the love between lusii is explored and interspersed for comedic effect; and the periodic love affairs of a jade-blooded Luxplorer are thrown in for romantic intrigue.

> Eridan: Do something epic.