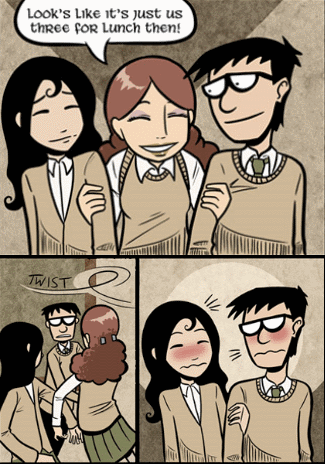 "Those two ended up married, you know. They are Kat's parents."
"In fact, I think I'll arrange a marriage. Come over often, Nick, and I'll sort of—oh—fling you together. You know—lock you up accidentally in linen closets and push you out to sea in a boat, and all that sort of thing—"
— Daisy to Nick about him and Jordan, The Great Gatsby

You all know Alice and Bob. Alice has a crush on Bob. Bob may or may not have a crush on Alice. Then there's Jane. Jane is a close friend of Alice who has nothing but Alice's best interest in mind. So she encourages Alice to go for it with Bob. Over and over again. Jane is a matchmaker.

More advanced cases will introduce Alice and Bob when they are strangers, because the matchmakers deems them perfect for each other.

This person is notable for several things. One, they can't seem to grasp the concept of personal space. Two, they seem to have a pathological obsession with hooking up their friends. If the subject is a single pair, the revelation that this person has feelings for one or both of them is entirely possible. Otherwise, this is something of a Love Triangle with only one romantic connection.

Take note that in older or period works, it is not uncommon to find an older figure who is rather skilled at this. Keep an eye out for professionals and relatives, and especially expectant parents who plan at Arranged Marriage.

A serial Matchmaker is often Oblivious to Love. Expect several attempts to make a match for the character madly in love with the Matchmaker, and resolution only to come at the very end. They may take cues from Astrology or Personality Blood Types when making their matches. If The Matchmaker is unsuccessful in their goal you get Matchmaker Failure.