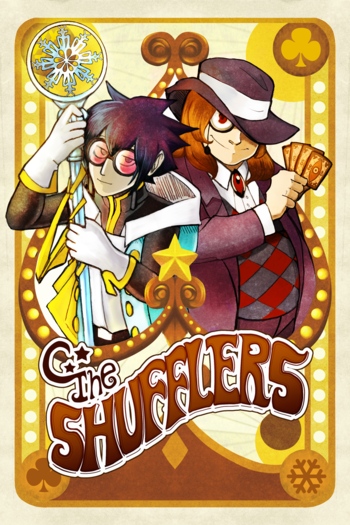 An unlikely duo. Left: Hiddenite, right: Märchen
"Märchen is a cartomancer, a playing card fortune teller blessed with the ability to provide accurate readings every single time. [...] Hiddenite is a mysterious wanderer with a literal world of his own that can only be accessed through his assigned piece of fabric; a curtain cloth. [...] When Hiddenite rescues Märchen from a brush with death, they form an unlikely friendship that takes them through fantastic adventures in a Neo-Victorian-esque world full of magicians, fortune tellers, and the non-magical folk that rely on them for prosperity."
— Description on the official website
Advertisement:

The Shufflers is a Fantasy webcomic illustrated by Emily Biernott with story contributions by Yuki. Biernott publishes the comic under the username BitterMause. The comic has been ongoing since 2014.

It can be found on the official website here

and also on Tapas Media here

The Shufflers contains examples of: