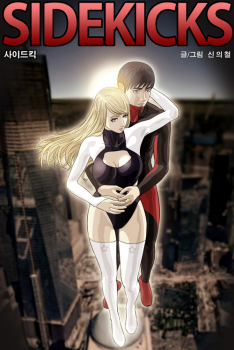 In Korea, there are sidekicks who are the assistants of the heroes. They all try to be the real hero to save the world.
Advertisement:

Even if people are born with superpowers, they must serve as sidekicks of superheroes in order to become superheroes themselves. Dream Girl has the power to make people fall asleep and is the sidekick of Darkslug, a world famous superhero who is not as great as he appears. One day, Dream Girl and Theo work together to get rid of villains and save the world. This is the story of the sidekick's journey to becoming a true hero!

Sidekicks is a fantasy-action Webtoon series that had taken its own spin on the "Sidekick" trope. Authorised and illustrated by IRON Shin, it was published on Naver in 2014 and has completed its second season in 2016. It can be read in English here.

The series has its own wiki.

Not to be confused with the film Sidekicks, the trope about Sidekicks, or the similarly named webcomic Sidekick Girl.