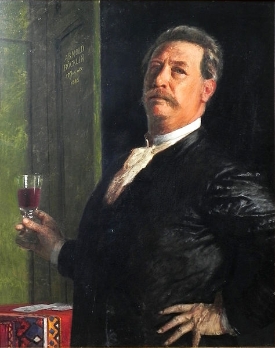 As long as you're painting a self-portrait, you may as well make yourself look classy.
Frasier: The wine shop is down to their last two cases of the '82 Chambolle-Musigny. Why don't you dash right down before someone snaps them up?
Niles: You know very well that in 1982 there was a drought in Bourgogne. The locals dubbed it the Year of the Raisin.
— Frasier
Advertisement:

Whenever a character is shown drinking wine, it's usually a good sign that person is high class or sophisticated (or trying to come off as such), especially if the wine comes from their special private stock. The connotations of this can vary depending on the person. For protagonists, wine knowledge can show that the character is an Officer and a Gentleman or a Gentleman and a Scholar, and serves to make the character look more worldly and refined. For villains, wine features prominently in introducing a Man of Wealth and Taste, often sporting A Glass of Chianti. Either way, wine drinkers will almost always be Blue Bloods or obsessive snobs who take it way too seriously. They'll consider it a blasphemy to drink white wine with beef or red wine with fish, pork, or poultry (a "true" wine connoisseur knows it's the other way around)note There are actually plenty of red wines that go well with fish and white wines with meat, but don't expect the writers to know that. Expect to hear Sommelier Speak.

This trope varies widely by culture. In most of Western and Southern Europe, particularly in countries with a strong wine-making tradition like France, Germany, Spain, and Italy, wine is viewed as a fairly mundane and commonplace beverage (to the point where wine is served in some McDonald's restaurants), though prestigious vintages and appellations still fit this trope and tend to be expensive (resulting in Conspicuous Consumption in fiction). It's also (in France) almost only drunk during meals, not between, and binge drinking is met with more social disapproval than with beer cultures. This may be an artifact of Roman times when drinking full-strength wine was considered barbaric and it was thus often watered down.

In the New World, wine-making is a relatively recent phenomenon, and its association with the Old World gave it some elitist connotations. While this has lessened, beer and spirits are still viewed as the primary "pedestrian" drinks in the Anglosphere, while wine is still associated with the upper classes, whether it be old money Socialites or Bourgeois Bohemians.

Wine has yet to gain the same degree of popularity as beer and sake in the East, but red wine is becoming increasingly popular among the middle class in China due to this trope. China is one of the top ten largest wine-producing countries in the world, though nearly all of it is produced for domestic consumption, and so has yet to gain the same sort of international reputation as major producers like France and Italy. That said, Chinese wine-drinkers have some... odd... ideas about what to do with their wine.

A Sister Trope to A Glass of Chianti, wherein a villainous character is putting on airs of being classy, either as part of their persona or for a disguise, by drinking wine. How well this works depends on what they're having, what food accompanies it, and how well other characters know wine and food. Also to Luxurious Liquor, where expensive spirits are used as shorthand for free wealth. And Tea Is Classy, where tea is used as a sign of wealth and prestige rather than wine.

This trope can also be inverted by "bum wines", which are the wine counterpart to A Tankard of Moose Urine, but these are much rarer in fiction (despite their ubiquity on store shelves the world over).