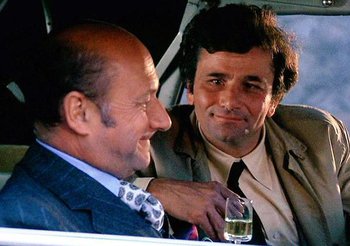 "Any Old Port in a Storm" is the second episode of the third season of Columbo.

Vintner and oenophile Adrian Carsini (Donald Pleasence) is about to be named man of the year by his fellow wine enthusiasts. Just before decanting a vintage claret with them, he goes to his office and encounters his half-brother Rick. The two brothers have never seen eye to eye; Adrian views wine as an art, whereas Rick sees it as merely a business and deplores his brother's high-minded amateurism and lack of business sense. He informs Adrian that he is getting married, and that he is going to sell the land on which the vineyard is built. Desperate to prevent this, Adrian knocks him out and drags him to his private wine cellar, where he ties him up and leaves him to die of suffocation and starvation. Meanwhile he and his private secretary Karen (Julie Harris) jet off to New York City for a series of vintage wine auctions. He returns and finds his brother dead, then dresses him in scuba gear and dumps him in the sea.

Rick's fiancee Joyce (Joan Stacey) goes to the police to report him missing. Although there is not yet any sign of a murder, Lieutenant Columbo agrees to look for Rick, who is soon discovered dead in the ocean, apparently the victim of a scuba diving accident. His convertible is found parked by the coast with the top up. Several things bother Columbo: Carsini's stomach was completely empty at the time of his death, suggesting a prolonged fast; the day Rick died (per the medical examiner's report) was rainy, and not ideal for scuba diving; Rick loved his car and would not have left the top down on a rainy day.

Columbo visits the vineyard and interviews people there, including Adrian Carsini and his secretary Karen. Everyone remembers Rick visiting the vineyard on the 16th, just before they left for their trip to New York City. Columbo next interviews Falcon and Stein, the two oenophiles who were visiting Carsini on the day his brother came to the vineyard. They don't recall seeing Rick, but remember that Carsini left the room for a while, and that after he returned, he allowed Falcon to decant the claret instead of doing it himself.

After a crash course on wine, Columbo uses his newfound knowledge to impress Carsini. He prevails on Carsini to give him a look at the wine cellar where his most expensive wines are stored. He asks whether someone could be locked inside, and Carsini insists that this is impossible, because the door can be locked only from the outside. Columbo asks for a demonstration, and Carsini obliges by briefly locking him inside the cellar.

Columbo asks Karen whether she saw Rick leave the winery on the 16th. She replies that she saw him arrive and leave. This contradicts the testimony of the vineyard security guard, but Karen claims the guard is an unreliable drunkard. Columbo immediately calls Carsini and invites him to an expensive restaurant, as a way of expressing his regret for having suspected him.

Before the dinner with Columbo, Carsini asks Karen if she suspects him of murdering Rick, and she claims that she doesn't. At dinner, Columbo orders a bottle of Ferrier port, vintage 1945, an exceptionally rare wine of which Carsini himself owns a single bottle. To Carsini's amazement, the restaurant has a bottle, and it is served to them. Columbo and Karen enjoy their first taste, but Carsini is disgusted. He can tell after one sip that the wine has been stored at too high a temperature, rendering it undrinkable. He makes a scene, and the maitre d' lets them leave without paying. Before parting, Columbo casually informs Carsini of a 109-degree day that occurred during his trip to New York. He also thanks Karen for helping to lay his suspicions to rest.

While driving back to the winery, Carsini asks Karen why she lied to Columbo, and she reveals her romantic feelings toward her employer. She wants to be more than just his secretary, and implies that she is willing to use her knowledge as leverage to force him to marry her.

After Columbo's remark about the 109-degree day, Carsini realizes that all his wine was spoiled by the heat, since he had switched off the ventilation system in order to suffocate his brother. He takes the bottles to the coast and begins throwing them into the sea. He is discovered here by Columbo, who explains how he was sure of Carsini's guilt: while he was briefly locked in Carsini's cellar he pocketed his bottle of Ferrier port. This was the bottle that the wine steward served them at the restaurant, the bottle that Carsini himself deemed dreadful as a result of overheating. Carsini agrees to confess, glad to escape a forced marriage to his secretary. Before booking him, Columbo treats Carsini to a Montefiascone dessert wine, which he deems very suitable for the “final course”.