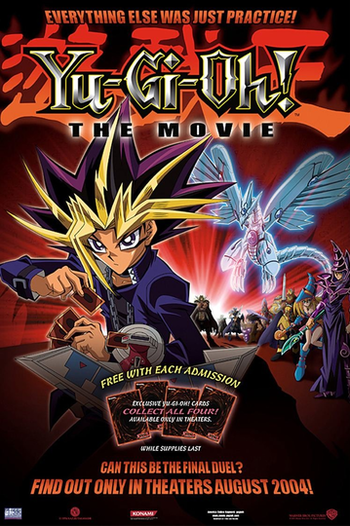 Yu-Gi-Oh! The Movie, known in Japan as Yu-Gi-Oh! Duel Monsters: Pyramid of Light (Yūgiō Dyueru Monsutāzu Hikari no Piramiddo) is the first film based on the second Yu-Gi-Oh! anime, and the first Yu-Gi-Oh! movie overall to be released outside Japan. It was commissioned and produced by 4Kids Entertainment in response to the franchise's growing popularity worldwide; the Japanese version features 13 minutes of additional footage.

Five thousand years ago, the young Pharaoh killed and imprisoned Anubis after he tried to destroy the world using the power of the Shadow Games. Millennia later, Anubis' tomb is uncovered by archaeologists, complete with his most valuable treasure, the Pyramid of Light. At the same time, Yugi Moto completes the Pharaoh's Millennium Puzzle, causing Anubis to awaken from his eternal slumber and begin his return from the dead.

In the present, Yugi has become the King of Games, being the world's greatest player of Duel Monsters. Yugi defeated Seto Kaiba and obtained the three powerful Egyptian God cards. Now desperate to beat Yugi, Kaiba turns to Maximillion Pegasus, the creator of Duel Monsters, to gain any kind of advantage over the God cards. Kaiba ends up taking two cards, although Pegasus claims he only created one.

Yugi and Téa go to the Domino Museum where Anubis's corpse and the Pyramid of Light are on display, meeting up with Yugi's grandfather who reads a prophecy describing a clairvoyant eye which will bring about the world's destruction unless blinded. Anubis' spirit attacks the group, and Yugi has a vision of a monster manipulating and attacking Kaiba. Yugi awakens to find Anubis and the Pyramid of Light have vanished, and he races to warn Kaiba. He is taken to Kaiba's duel dome by Kaiba's little brother Mokuba, with Joey and Tristan in pursuit.

Yami Yugi and Kaiba engage in a duel, which soon turns dangerous when Anubis manipulates Kaiba into using the Pyramid of Light card, which covers the field in a huge replica of the actual pyramid and destroys the God Cards. Worse, a Shadow Game has taken effect, meaning when players lose life points they lose their life energy. Yugi and his friends are trapped inside the Millennium Puzzle, where Anubis awaits his rebirth. It's up to Yugi to save Kaiba and rid the world of the evil Anubis.

The film was a box office disappointment in North America (where it was titled simply as Yu-Gi-Oh!: The Movie), although it is still the sixth-highest grossing anime movie of all time there, just barely ahead of Studio Ghibli's The Secret World of Arrietty.