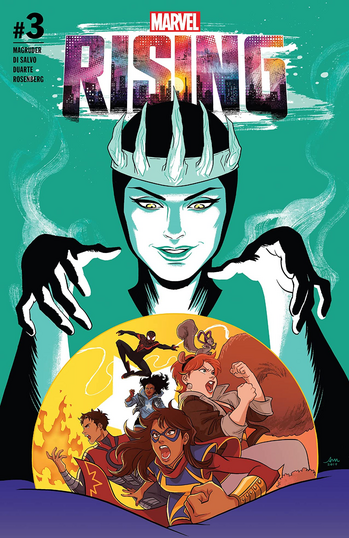 "I spy with my wicked eye, a bunch of losers!"
"Composition-wise, this cover is actually more interesting than the ones we're used to seeing. We actually have something that catches the reader's attention, with the menacing villain holding the symbols of the heroes by knives."
— Linkara, Daredevil #306

Box art or advertisement that features the villain's head "watching" the hero. Many posters and video boxes for Western animated films feature this trope, especially if they are from The '90s, though in recent history, this trope has seem something of a comeback. Sometimes, the villain looks like they are trying to grab the main characters or the MacGuffin.

This trope is related to Floating Head Syndrome, though the latter is not typically viewed as fondly. For when a villain is overlooking a scene in-story, see I Have the High Ground.