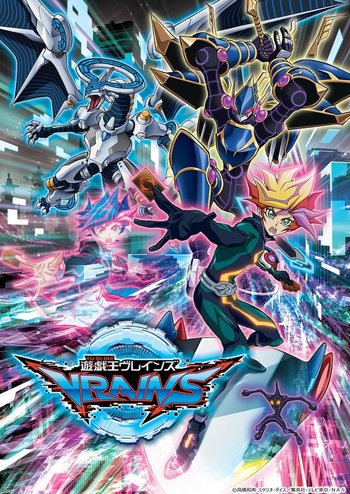 Yu-Gi-Oh! VRAINS is the sixth series in the Yu-Gi-Oh! franchise. It began airing on May 10, 2017 as part of the Spring 2017 Anime lineup and concluded on September 25, 2019, spanning a total of 120 episodes. A TV special, Yu-Gi-Oh! LABO, was aired between April 5, 2017 and May 3, 2017 to introduce its characters and setting. It can be legally watched on Crunchyroll with subtitles here

. This would be the last Yu-Gi-Oh! series to be adapted by Gallop, with Studio Bridge taking over for the next series.

In Den City, the advanced networking technologies created by the "SOL Technologies" corporation has produced an amazing virtual world known as "LINK VRAINS" (Virtual Reality and Artificial Intelligence Network System). Within the cyberspace of LINK VRAINS, duelists transform into colourful alter-ego avatars and compete against each other, with the most popular competitors making a living as online celebrities called "Celebrity Duelists".

However, a mysterious group called the Knights of Hanoi is illegally hacking into the virtual world and wreaking havoc. Their goal is to find and destroy Cyberse, a sanctuary network for Artificial Intelligences hidden somewhere within LINK VRAINS.

Yet one duelist has become famous for leading the fight against Hanoi: the enigmatic "Playmaker". In the real world, Playmaker is an unassuming Ordinary High-School Student and computer hacker named Yusaku Fujiki, who is exploring LINK VRAINS for answers to a certain incident in his past. One day he captures a mysterious A.I. program being pursued by both SOL and Hanoi, one that holds the secret to Cyberse. With this, the winds of the "Data Storm" begin to blow through LINK VRAINS once again.

open/close all folders
#–D
E–M
N–S
T–Z
Into the VRAINS!