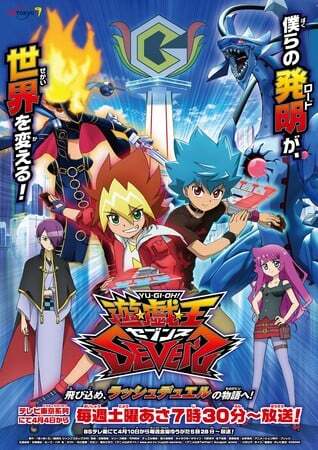 Yu-Gi-Oh! SEVENS (遊☆戯☆王 ﻿ＳＥＶＥＮＳ, Yū☆Gi☆Ō Sebunsu) is the sixth anime spin-off in the Yu-Gi-Oh! franchise premiering on April 4, 2020. Celebrating the 20th anniversary of the Yu-Gi-Oh! Duel Monsters anime metaseries, it was announced with the teasing phrase "the history of the Yu-Gi-Oh! anime series will change".

In Goha City, where everything from schools to card games is heavily regulated by the Goha Corporation, fifth-grade student Yuga Ohdo aims to follow his own path - his own "Road" - to bring fun and excitement back into his life. His latest "Road" is a custom ruleset for the popular Duel Monsters card game, which he feels has become overburdened by complex rules and mechanics.

After hearing an urban legend about a "King of Duels" from his friend Tatsuhisa Kamijo (aka "Luke"), the two boys discover a strange stone monument guarded by a holographic Duelist. Impressed by their resolve and enthusiasm, this mysterious Duelist uploads Yuga's new ruleset to all of Goha City, and offers them the chance to become the new King of Duels: by following the Road known as "Rush Duels", and revitalising the Dueling world!

SEVENS introduces the "Rush Duel" format, a soft reboot that aims to greatly streamline and simplify Duel Monsters (following on from the Speed Duel format introduced in Yu-Gi-Oh! VRAINS, and the format used by Yu-Gi-Oh! Duel Links). In addition to using a new card format that can only be used in Rush Duels, the rule changes include (but aren't limited to): the number of Monster and Spell/Trap Zones is reduced from five to three, the one-per-turn limit on Normal Summons is removed, players always start their turns with at least five cards in hand, and all monster effects have a once-per-turn limitation to keep things straightforward.

The series is succeeded by Yu-Gi-Oh! GO RUSH!! in Spring 2022, a Distant Sequel set in the same universe that stars Yuga's descendants and also focuses on the Rush Duel format.