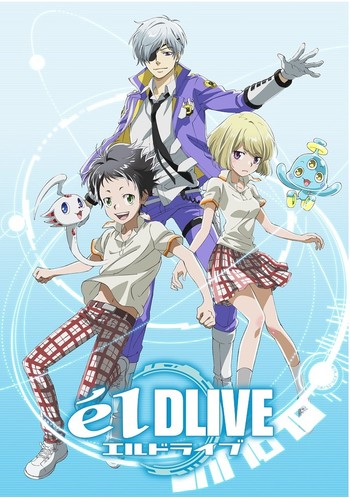 Ever since Chuuta Kokonose could remember, he could hear and talk to a voice that no one else could hear. This has caused him a lot of embarrassment in school, and anywhere else.

However, one day, he was suddenly transported to a spaceship and was told that he was chosen to be an officer for élDLIVE, the space police. And despite being totally unprepared, Chuuta manages to pass the entrance exam with help from Drew, an alien that had chosen Chuuta to be its host, a.k.a. the voice.

Now, along with his team member, Misuzu Sonokata, who also happens to be Chuuta's cold, aloof, classmate, and the other élDLIVE officers, Chuuta must be prepared to protect the universe from danger.

Written and drawn by Akira Amano (in full color), who is most known for creating Reborn! (2004) and being the original character designer for Psycho-Pass. It began serializing in 2013 in Jump LIVE, and moved to Shonen Jump+ in 2014, where it ran to its completion in 2018 with a total of 11 volumes. élDLIVE differs from other manga series by being separated into seasons, with a break between each.

On March 3, 2016, élDLIVE was announced to have an anime adaptation by Studio Pierrot as part of the Winter 2017 Anime season. It is available for streamingnote Only in U.S.A, Canada, United Kingdom, Ireland, Australia, New Zealand, South Africa, Latin America (Central and South America including Caribbean), Norway, Sweden, Finland, Iceland, Netherlands, and Denmark subtitled on Crunchyroll here

, and with an English Dubnote  Only in U.S.A, Canada, United Kingdom and Ireland on FUNimation here