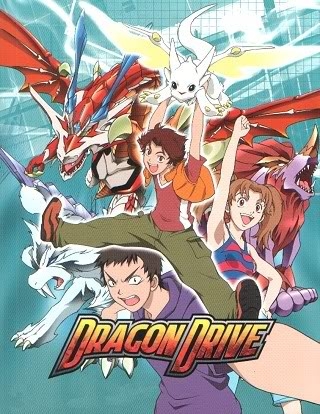 The cast of Dragon Drive, featuring hero Oozora Reiji and his dragon Chibisuke in the center
Advertisement:

The story is about a boy named Oozora Reiji, and his adventures in a virtual world. No, not The Matrix, this world is where children go in secret away from the adults, to play a game called Dragon Drive. Each child gets his or her own dragon, hand picked by his or her own personality. Reiji goes to check this place out and finds himself with the weakest dragon there: a tiny squirt, which he names Chibisuke. But what he didn't know was that inside Chibi was a power stronger than he thought.

The manga and anime provide examples of: