GET IN THE BATTLE ZONE! 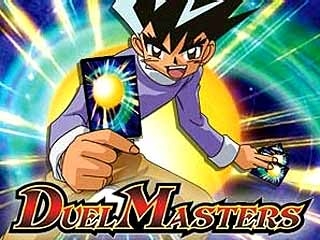 Who's the kid with the spiky hair?
Advertisement:

Following the original Duel Masters manga, which used cards from Magic: The Gathering instead of the Duel Masters cards (which were created for this series, thus explaining the similarities), the anime is what helped the Duel Masters franchise to hit the mainstream.

As explained on the Duel Masters main article, the anime is completely different whether you are looking at it from the Japanese version or the North American version. While the former is a serious series about a children card game (not unlike the series which inspired it), the latter is the Ur-Example of The Abridged Series in all but longevity.

The story revolves around Shobu Kirifuda, an enthusiast of the titular card game who is exposed for the first time to a higher level of play (referred to in the North American release as Kaijudo, literally "the way of monsters"; in the Japanese series, it was called "Duel of Truth"), in which actual monsters serve the will of their summoners. As his father had mastered the game before him, Shobu feels a certain need to live up to his family's reputation.

The series consists of the following seasons. Note that after the first two seasons, the anime was discontinued in America. The Japanese version, instead, continued to run for many more seasons with To Be a Master as a central point. Shobu was later exchanged as a protagonist with his younger brother and later his nephew.

Please note that most (though not all) of these tropes are either common to both versions or are otherwise based on the North American version. The original Japanese, while still having comedy, played it straight for the most part.