Manga / The Dungeon of Black Company 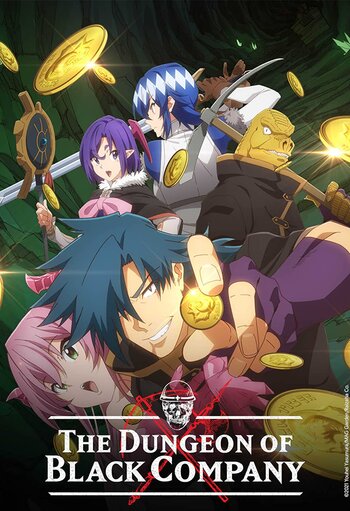 From left to right: Rim, Kinji, Ranga, Shia, and Wanibe
"Looking down on the populace is a right only reserved for the victor."
— Kinji Ninomiya
Advertisement:

The Dungeon of Black Company is a manga series by Yohei Yasumura that began in 2016. The series is about Kinji Ninomiya, a NEET who managed to work the real-estate market to amass enough money to afford a penthouse lifestyle without ever having to work a regular job. Naturally, this does not last.

His gloating about his lavish lifestyle is cut short when a portal opens up beneath his feet and whisks him away to another world. Shortly afterwards he is forcibly conscripted into working for a mining company extracting crystals from an old dungeon. Pissed-off about his new lot in life and desperate to get back to a life of luxury he end ups conducting dangerous exploration missions in the dungeon to gather more crystals and forms an adventuring party, the titular Black Company.

The manga was adapted into an anime by Silver Link and began airing on July 9, 2021.