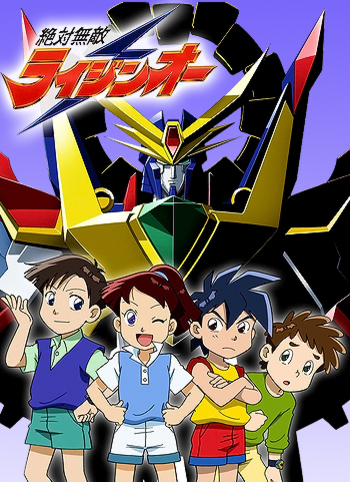 Why let mature, responsible adults pilot your super weapons when there are a full homeroom of perfectly good children right in front of you?
We are the Earth Defense Class!
Advertisement:

Zettai Muteki Raijin-Oh, titled Matchless Raijin-Oh on all further English releases, is the story of the world's most powerful super weapon and the classroom of children who command it.

Eldoran, the defender of the Earth, pilots a set of giant robots that can combine and form the mighty warrior, Raijin-Oh, and is charged with defending the planet from evil aliens. When the Jaku Empire, a race of fifth-dimensional beings, descends upon the Earth in attempt to conquer it, Eldoran is there with Raijin-Oh to drive the forces of Evil away and keep the planet safe from harm. An epic space-robot mecha battle is about to begin!

Or not. Eldoran goes down in less than a minute and is sent hurtling toward the planet.

Injured and struggling to keep control of his vessel, Eldoran can't escape the Earth's gravitational pull and falls toward the Earth — more specifically, straight toward an unsuspecting Japanese elementary school.

Meanwhile, Mr. Shinoda's fifth-grade class is staying after hours due to poor scores on a recent test. Some odd activity in the afternoon sky catches the attention of the students, and they stare outside, dumbfounded...until they realize an unidentified object is heading straight for them—Oh, Crap! GET OUT OF THE WAY!!

Actually, no! With the last of his power, Eldoran is able to preserve the children's lives...at the cost of his own. However, the threat of the Jaku Empire still looms above the Earth. With Eldoran gone, there's no one to pilot Raijin-Oh, so he must name an heir quickly and pass on the power to someone who can defend the planet in his stead. Unfortunately, the only ones around to ask are the fifth-graders he just rescued. Left with no other choice, he passes the robots onto the children with little explanation, and uses the strength he has left to reformat their classroom into a pimped-out computer command center.

Left with no choice and no instruction, the children of class 5-3 — now with three (later four) giant robots at their disposal — are forced to learn how to defend the Earth on their own by trial and error. Hilarity Ensues.

Zettai Muteki Raijin-Oh, the first series of the Eldoran franchise trilogy, is a genuinely heartwarming series that has a surprising amount of character development; much more than you would expect from a giant robot show aimed at younger children. The main cast is made up of the eighteen students, each with their own distinct look, personality, and duty. The three stars of the series are Jin, Asuka and Kouji, who are charged with piloting the three robots that combine to form Raijin-Oh. While they're out fighting, their Class President, Maria takes control of the command center and guides the entire class body to monitor Raijin-Oh.

The show is based on a very simple concept, but it's executed very beautifully. The writers aren't afraid to lampshade classic tropes of the Giant Robot genre on a regular basis.

Almost 20 years after first airing in Japan, it was licensed by a brand-new anime distribution company called Anime Midstream

. Despite many doubts, Midstream successfully released the first volume of Raijin-Oh at the end of December 2009, with more releases coming over the next several years, before finally reaching the end of the series in 2014.