Manga / The Electric Tale of Pikachu 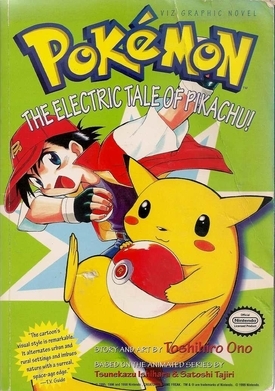 The Electric Tale of Pikachu (Pocket Monsters Dengeki Pikachu in Japan) is a manga adaptation of the Pokémon anime, which was serialized in CoroCoro Comic from 1997 to 1999 and compiled into four volumes. The first three cover the Ash Ketchum's Indigo League journey, and his Orange Islands travels were covered by the end of the third volume and the fourth volume. Now, that's a lot of show for just four volumes, so of course there was a little plot adjustment.

The series attempts to present a slightly more "grown-up" version of the anime's story, with a more explicit presentation of the violence of the Pokémon world itself. It also recasts Ash's journey as a proper Coming-of-Age Story, with a remarkable amount of Character Development for the star. It's well-known for its mature art style; more serious, linear tone; and for its unique plot structure.

It was released in the West under a Viz Media localization team as single-chapter booklets that came packaged with individual Pokémon VHS tapes and later in full paperback volumes. Chuang Yi Comics released their own translation of this manga in Singapore, adopting Viz's changes in later volumes.

Of course, that's not why you heard of this series. (Really, who do we think we're fooling)? Chances are, one of the first things you heard about this series was the fact that it was much Hotter and Sexier than the anime, and ended up subject to far-sweeping Bowdlerization by the localization team. The original, untranslated comic is especially notorious for its Stripperiffic variety of Fanservice and especially for its application to the main heroine of the show, Misty, who ranks in at 12 Years Old but who appears to be all grown-up. This notoriety can be laid squarely at the feet of the artist, Toshishiro Ono, who... well, usually writes something else entirely.

(Something else you may have heard about the series is that Jessie and James got married in the epilogue).