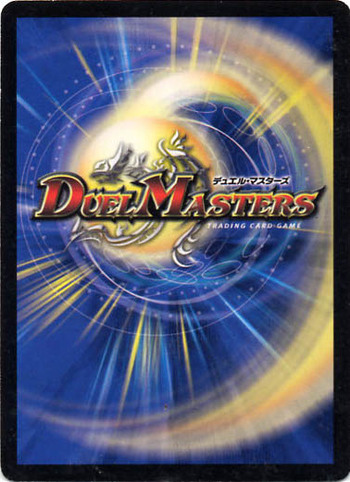 Duel Masters is a Collectible Card Game jointly developed by Wizards of the Coast and Takara Tomy, based on the card game which appeared in the Duel Masters manga and anime. Despite being relatively obscure in the west, the game is one of the most popular collectible card games in Japan, and is popular enough to compete with Yu-Gi-Oh! and Magic: The Gathering as one of Japan's most played trading card games.

Gameplay-wise, the game's core mechanics are derived from Magic: The Gathering, as a result of some interesting historical developments when Duel Masters was a Magic manga, which are overviewed on the franchise page. There are 5 Civilizations (Fire, Water, Light, Darkness and Nature), and playing any of the cards require paying Mana from your Mana Zone. Decks must have a minimum of 40 cards, and a maximum of 4 copies of an individual card.

One big difference from Magic is that it does away with Mana-supplying Lands; instead, any card can be put into the Mana Zone to generate Mana. This gives the game more flexibility against "dead draws" than almost any other card game, at the price of forcing players to make decisions on which card should be used for Mana, and which ones to keep.

Another difference is the absence of Life, which is replaced with 5 Shields, the top five cards from the player's deck placed face down in the Shield Zone at the start of the game. Shields are broken by creature attacks, and broken Shield cards are added to their owner's hand, or immediately played at 0 mana cost if they have the Shield Trigger ability. When all the Shields are broken, landing one more direct attack on the shieldless player will cause them to lose the game and grant their opponent victory. Running out of cards in a player's deck to draw from will also cause a loss.

It spawned a few games for the GBA and for the PS2.

While the game was canceled in 2005 in America (and worldwide), it still keeps on running in Japan.

Not to be confused with the American remake, Kaijudo.

Not to be confused with Duel Monsters.

This game includes tropes of: