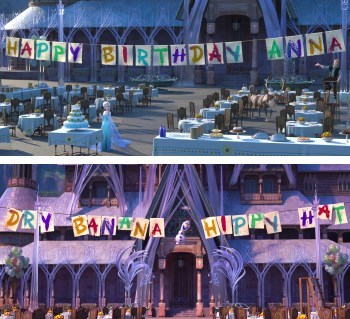 Olaf's spelling skills are the best in Arendelle.
"I know things look bleak, but even the word 'hopeless' has the word 'hope' in it! Plus, if you rearrange the letters, it spells 'peeslosh'! The last part was probably unnecessary, I'm sorry."
— Narrator, BattleBlock Theater
Advertisement:

Writers frequently give out names which have important anagrams, often as a way of hiding significant facts in plain sight or drawing clever (and plausibly-deniable) parallels between characters. For example, signing something Shroer Pitt. (405 results found.

Similarly, characters hunting for a clever alias, or attempting to rename themselves, have a strange tendency to choose anagrams; compare Sdrawkcab Alias.

For obvious reasons, this is more common in printed media. By necessity, appearances in films or TV shows are often accompanied by Hollywood Spelling.

Perhaps you would like to make a deposit in the Anagram Bin before you leave?

Switch the letters of his name around, and it says...

Example of:
Actually, I Am Him

Switch the letters of his name around, and it says...