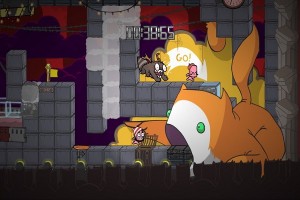 BattleBlock Theater is a 2D co-op style Puzzle Platformer created by The Behemoth for the Xbox 360 and Steam. Riding aboard the S.S. Friendship, a crew led by the world's bestest friend Hatty Hattington soon finds itself caught in a storm. Thrown off-course and crashing on the island, Hatty is captured by the resident cat monsters and forced to wear a glowy red hat, turning him villainous. With the crew of hundreds imprisoned, they must fight like gladiators through numerous obstacle courses and rescue each other and Hatty.

The gameplay revolves around 'stages' in the decidedly gruesome prison/theatre that the game takes place in, where your character is currently locked up in, and the blocks that they are made up of. The game's co-op component is described as "co-optional" (screwing each other over might as well be encouraged, or even mandatory), and there are many versus multiplayer gametypes, such as capturing tofu horses and shooting soccer balls into… basketball hoops. Based off their Alien Hominid PDA Games.

BattleBlock Theater as a whole is an example of: