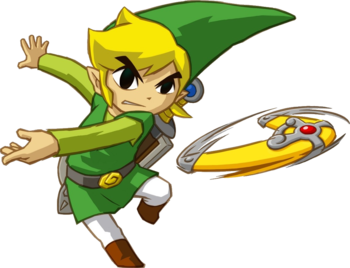 Link's ranged weapon of choice. Until he gets his bow, at least.
Advertisement:

Boomerangs as the Weapon of Choice of characters. Expect to see the stereotypical boomerang shape that allows it to come back to the thrower, even though real-life weapon boomerangs aren't designed to do that. Also, expect the boomerang to come back even after hitting its target, which makes absolutely no sense in real life.

Oddly, when this trope is in use, it's unlikely to be used by an actual Australian, aboriginal or otherwise, even though it is an iconic symbol of the country to the rest of the world. Note that, pop culture aside, this is not more than Truth in Television: returning boomerangs were actually known on all the five continents, with ancient Egyptians and Germans being among the nations of the old world that used it.

In video games, the boomerang often does slightly less damage than comparable weapons with the tradeoff that it won't use up ammo if you can catch them. They often will also be able to carry items and pickups back to the player.

Precision-Guided Boomerang also covers other items are used like a boomerang.

Not to be confused with Cartoon Network's programming block/spin-off channel, Boomerang.

As one might take from the first paragraph, these did/do exist in real life, but they're hardwood clubs that are curved so that they can be thrown, whereas the conventional boomerang is a hunting tool designed mostly for hitting small birds.

Boomerang Bros' throw boomerangs at Mario, doing damage on the way to him and on the way back.

Boomerang Bros' throw boomerangs at Mario, doing damage on the way to him and on the way back.